The Phillips' Kandinsky exhibition centers around this painting from
the Guggenheim, Painting with White Border, 1913. It appears primarily
abstract, but has two specifically Russian iconographic references: a troika
(three horses) and St. George and the Dragon.

The Phillips Collection's current exhibition on Kandinsky not only provides insight into the thought process of this giant of early 20th century abstraction, but it also gives us a chance to compare the artists with whom he worked and influenced.

The Kandinsky exhibition is juxtaposed next to an exhibition of contemporary artist Frank Stella, whose sculptures are influenced by music of Domenico Scarlatti, called Stella Sounds. The metal and plastic sculptures point, poke off the walls and into space curving vigorously with color. They become 3-dimensional expressions of abstraction comparable to Kandinsky.


Frank Stella's K43 comes out of the wall and into space. His sculptures
on view at the Phillips are based on the Sonatas of Italian composer Domenico Scarlatti 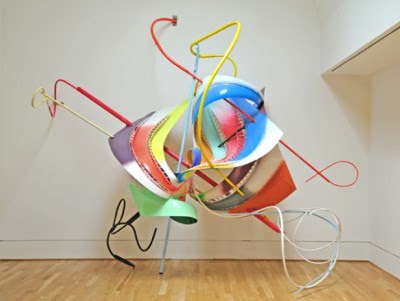 Both artists were inspired by music and Stella admits his appreciation for Kandinsky. Kandinsky named most of his early abstract paintings with titles suggestive of music: Improvisation, Composition, Impression, followed by a number. Ironically, the Phillips calls its exhibition Kandinsky and the Harmony of Silence: Painting with a Large White Border. The white border may be silent and restful, but the rest of this large painting has a rich depth, as each strong color pushes into space and clamors for attention.

The Phillips exhibition is educational, showing his drawings and his working process. Included is Sketch 1 for Painting with White Border (Moscow), a major holding of The Phillips Collection, as well as ten other preparatory studies in watercolor, ink, and pencil. But even more instructive is putting Kandinsky in perspective with his colleagues in two German art groups, the Blaue Reiter and the Bauhaus. If the great Russian painter and philosopher was the spiritual leader amongst the abstract artists centered around Munich, their spokesman, it is fitting because his art is the brashest and most assertive of the group.

The Phillips Collection has a superb painting by Franz Marc, Deer in the Forest, II. Looking forward to environmentalism, this painting hints at the destruction of nature in the 20th century. Unfortunately the artist himself died in World War I.

The Phillips owns many paintings done by Kandinsky's colleagues : Franz Marc, the other leader of Der Blaue Reiter (The Blue Rider) who died in World War I; the nervous Austrian, Oskar Kokoschka; the whimsical, childlike but sophisticated Paul Klee, and the playful American-German Lyonel Feininger. It's a special treat to see the other early masters of Expressionism.

Lionel Feininger's Village is a geometric construction of shifting planes of color.

Beginning in 1922, Kandinsky taught at the Die Bauhaus, a comprehensive art and design school. Paul Klee was one of his colleagues there, as well as in Der Blaue Reiter. Klee's art is as abstract, automatic and free as Kandinsky. But his vision is more subtle, more simple and more symbolic. Having at least 5 paintings by Klee to compare, we clearly see the difference.

Paul Klee,Tree Nursery, 1929, is one of several Klee paintings on view to compare with Kandinsky. In Klee's paintings--not Kandinsky's - we see the harmony of silence.
One of the great strengths of this Washington museum is its commitment to comparative exhibitions which give the viewer a fuller understanding of individual artists. Fortunately, the Phillips already has a large collection of early Modernism to supplement its exhibitions. The Kandinsky and Stella displays will be on view until September 4.
Posted by Julie Schauer at 12:38 AM