The Caryatids Have Hair - Lots of it!

Six famous women hold up the Porch of the Maidens of the Erechtheion, a temple on the Acropolis of Athens. These statues are admired for their graceful poses and drapery, but who notices the hair? An Art Historian who specializes in the sculpture of the Acropolis, Katherine Schwab, has studied the hairstyles and made a project of it for her students at Fairfield University in Connecticut. Here's a summary of a presentation she gave last night at the Greek Embassy in Washington. 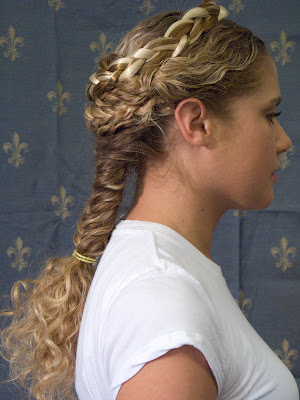 In the New Acropolis Mus 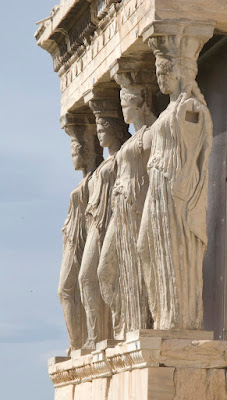 eum, Athens --which was just built a few years ago -- one can see the statues from the back with their beautiful long braids of hair, falling in fishtails followed by more curls. In fact, the hair of the statues is in better condition than the faces and bodies whose arms are completely missing. (Caryatid is the name given to a feminine statue which acts as a column to hold up a building; Kore is a statue of a maiden.)

These six caryatids are
labeled Kore A - Kore F.


Every hairstyle is a bit different. Most have fishtail braids down the back, along with regular braids wrapped around the head. Some of the caryatids have sidecurls, while others do not. Professor Schwab did the Caryatid Project with hai 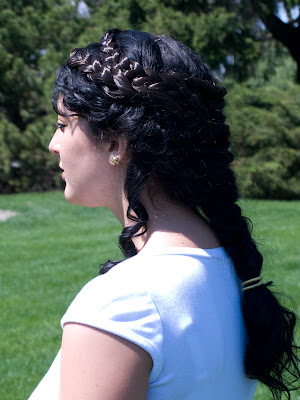 r stylist Miloxy Torres who recreated the braids on 6 students, all of whom had long, thick and mainly curly hair. The students acted out the caryatid poses other at the Fairfield University c 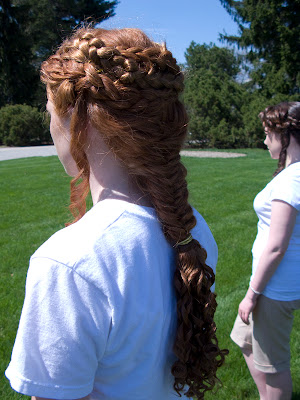 
The Porch of the Maidens adorns the Erechtheion which honors Athena, Poseidon, and two legendary kings Erechtheus and Krekops.  It is an unusual building in many ways: three porches of different sizes going out in different directions.  It was of special civic and religious significance to the ancient Athenians, because it marked the site of the contest between the god of the sea, Poseidon (Neptune) and Athena, goddess of war and wisdom, for control of Athens.  In that competition presided over by legendary King Kekrops, Poseidon's Neptune struck a hole on a rock to bring forth a spring of salt water.  Nearby, in front of the building, Athena miraculously brought to life an olive tree. Athena's gift was deemed greater and she became the ruler of Athens.  One portion of the Erechtheion contains a wooden statue of Athena which fell from heaven during the reign of Erechtheus, but the Porch of the Maidens stands over the hole where Poseidon tapped his trident.