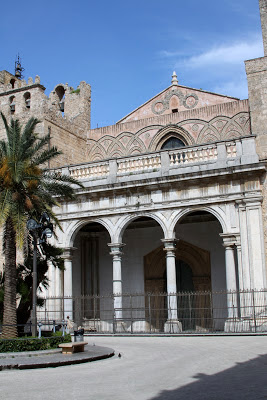 The island of Sicily has a central location in the Mediterranean Sea which has made it the most conquered region in Italy, and perhaps the world.  Even the Normans who ruled England also went to Sicily.  Despite the violence of the Middle Ages, today we can recognize that era in Sicily as providing an example of cross-cultural cooperation which is to be admired.  Islam, Judaism, Greek Orthodoxy and Roman Catholicism lived in tandem and with tolerance during most of that period.  The different religious and cultural groups poured the best work of various artistic traditions in to the building of Monreale Cathedrale, about 8 miles outside of Palermo.


A Norman ruler, William II (1154-89), built Monreale Cathedral between 1174 and 1185. When the Roman Empire first became Christian, Sicily reflected the ethnic Greeks who lived on the island.  In the 8th century, Saracens conquered Sicily and held it for two centuries, although a majority of residents were Christians of the Byzantine tradition. William the Conqueror's brother Roger took over the island in 1085, but allowed the other groups to live peacefully and practice their religion. Normans, Lombards and other "Franks" also settled on the island, but the Norman rule between the late 11th and late 13th centuries was quite tolerant.  By the 13th century, most residents adopted the Roman Catholic faith. Germans, Angevins and finally, the Spanish took control of the island.


Monreale Cathedral was built on a basilican plan in the Romanesque style that dominated Western Europe in the 12th century, although the Gothic style had already taken hold in Paris at the time of this building.  It is based on the longitudinal cross plan with a rounded east end. Two towers flank the facade.  (This Cathedral ranks right up with Chartres and Notre-Dame of Paris, as one of the world's most beautiful churches.)

In the artistic and decorative details, there is great richness.  The portal has one of the few remaining sets of bronze doors from the Romanesque period.  These doors were designed and cast by a Tuscan artist, Bonanno da Pisa.  A cloister, similar to the cloisters of all abbey churches has a beautiful courtyard with figural capitals. Its pointed arches betray Islamic influence. The sculptors who carved the capitals are thought to have come from Provence in southern France, perhaps because of similarity in style to abbey churches near Arles and Nîmes, places with a strong Roman heritage.   However, on the exterior apse of the church is a surprise.   It has the rich geometry of Islamic tile patterns.  Islamic artists who lived in the vicinity of Monreale were probably called upon to do this work.

The Greek artists who decorated the Cathedral's interior were amongst the finest mosaic artists available. The Norman ruler may have brought these great artisans from Greece. Monreale Cathedral holds the second largest extant collection of church mosaics in the world. The golden mosaics completely cover the walls of the nave, aisles, transept and apse - amounting to 68,220 square feet in total. Only the mosaics at Hagia Sophia in Istanbul, Turkey, cover more area, although this cycle is better preserved.  The narrative images gleam with heavenly golden backgrounds, telling the stories of Biblical history.  The architecture is mainly western Medieval while imagery is Byzantine Greek.


A huge Christ Pantocrator image that covers the apse is perhaps the most beautiful of all such images, appearing more calm and gentle than Christ Pantocrator (meaning "almighty" or "ruler of all") on the dome of churches built in Greece during the Middle Ages.  The artists adopted an image used in the dome of Byzantine churches into the semicircular apse behind the altar of this western style church.  Meant to be Jesus in heaven, as described in the opening words of John's gospel, the huge but gentle figure casts a gentle gaze and protective blessing gesture over the congregation.  He is compassionate as well as omnipotent.

Posted by Julie Schauer at 5:47 PM