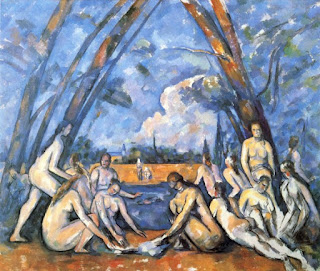 Cézanne worked on The Large Bathers, now owned by the Philadelphia Art Museum, during the last 8 years of his life.  He did about 200 paintings of bathers, and another one in the National Gallery of London is also called Large Bathers. Its French name, Les grandes baigneuses, pays homages to the grandest of Cézanne's compositions of this subject, which may be his final statement of the theme as well.  To me it seems truest of an Arcadian dream, as witnessed in the Philadelphia Museum of Art's recent exhibition.

The composition was clearly important to Cézanne in the search to find his truth. Through making art, he explored, subjectively, that which is true and everlasting in nature and in human existence.  In his early paintings he used heavy brushwork, but as time went on he thinned the paint and applied it tentatively, as if his vision was changing. Planes of various colors overlap, but outlining shapes brought transient visions back to clarity. Cézanne worked with the Impressionists in the 1870s and had painted with them near Paris, but returned to his hometown, Aix-en-Provence in the early 1880s.  In Aix, he mixed modernism and classicism, searching to add something solid and permanent to an Impressionist vision of color, while painting some of the same scenes over and over again. 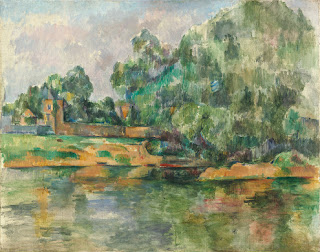 Cézanne, Riverbank, c. 1895 National Gallery of Art, Ailsa Mellon Bruce Collection
Location is imprecise, but it is the type of river scene which inspired him
The Roman name for Aix-en-Provence implied natural baths or springs

Of course truth to Cézanne was tied to nature, where he sought refuge. Cézanne was equally tied to Virgil, whom he regularly quoted in Latin while painting among the rocks, trees, waters and paths that still contained vestiges of ancient Roman pastoral life. Romans founded Aix-en-Provence, called Aquae Sixtiae Silluviorum, in 123 BC, at the site of natural baths or springs, and fought a battle at the site of Mont Saint-Victoire 20 years later.  Cézanne grew up with a very classical education of Latin and Greek at the École Bourbon in Aix.  We note that this painting and others are modern but seem as classical as paintings by Poussin, who also often included landscapes similar to Mont Saint-Victoire is his compositions. 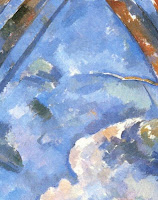 In Cézanne's The Large Bathers, the nude women stand, kneel or sit, almost in symmetric formation, creating several triangles within the larger triangle of trees. They are enclosed within the trees just as an altar is enclosed within a church.  The curved roof of a Gothic church could provide a sacred space, but here it is nature's roof, the trees.  The women seem to be performing a ritual, as if making a picnic, but we can't tell what they do.   A river and two patches of scorched brown earth run horizontally, suggesting true-to-life distance. Further back, trees and church steeple point upward.

Usually a church is the highest point, the center of a composition, but here it is subordinated to nature. Note, that in the background that the shape of the church and the trees is the same.   The larger trees, the foreground trees which frame the women, don't join at the top, and a central tree in the distance points to an opening, very suggestive of the upward ascent to the divine.  The church is within this framework and a part of this ritual space where these women play a role and act out a ritual, but not the means to an end. The trees, i.e.nature, have replaced the church as the shelter and the vessel to carry them to divinity. 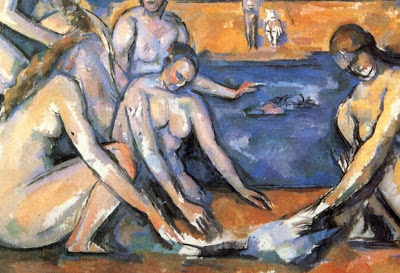 One woman's finger points to the water where there is a swimmer, a detail too deliberate to be ignored and obviously something Cézanne wished to emphasize. The painting may suggest death, as the artist himself knew he was approaching the end.  (In Greek and Etruscan paintings, swimmers diving into the water are thought to represent the diving into the afterlife, although I'm not sure if Cézanne was familiar with such paintings.)  Beyond the swimmer, two figures have reached the other side.  When we get back to main scene, we see that two or three women on the right will be diving soon. The other nymphs are acting, making preparations or staging a dress rehearsal, without clothes, for their ultimate transformation, the passing from earth to afterlife.  Note they are calm and at peace, which makes me think Cézanne must have been at peace when he died.

Cézanne worked on this painting for about 8 years and it is the culmination of so many studies of bathers he did. (I was told that his models were actually bathing men, but he made them into women.) He lacks interest in correct anatomy and sensuality, but was deeply interested in meaning which he explored by connecting the relationship of the parts to the whole. Their nude forms take on geometric constructions, and motifs of the circle, triangle and cone are present, even in outline, here. He left open patches on parts of their bodies, as he sometimes did, but it's also possible the painting is unfinished. This painting  represents Cézanne as an artist on a quest to understand humankind in the order of things, whose place in strong, but humbled next to the greatness of nature.                 Detail photos come from this website:            http://www.artble.com/artists/paul_cezanne/paintings/the_large_bathers

We note that in painting and others by Cézanne, there is balance of verticals and horizontals, warm and cool tones, sky and earth -- the heavens and the earth. Cezanne is also both classical and modern in style and composition, as he takes from the past to point to the future.  Again, that pointing finger reminds us of the journey from the world of the past to the world of  the future, just as it reminds us that death is a natural process of life.

Though Cézanne may not have been pleased with much of his art while here on earth, he has received an immortality in the end.  Picasso, Matisse and others said he was the single greatest inspiration on the course of 20th century art, perhaps because of his ability to capture the essence over detail.  The Grand Bathers is the essence of living life attuned to nature.
Posted by Julie Schauer at 8:17 AM