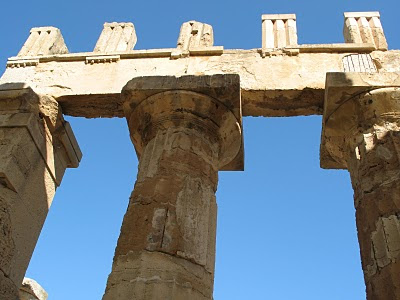 In Selinunte, Sicily, the remains of several Greek temples from the 6th- 5th century
BC can reveal much about temple construction, although they fell to Carthaginian invasions and earthquakes not long after their building.                     Architect Mark Schara,
with his good eye for detail, took almost all of these photos.
Temple E has most of its outer colonnade, the peristyle, restored.Classical harmony is apparent in the rhythm of fluted columns, continuing up into the triglyphs raised to the sky.
. 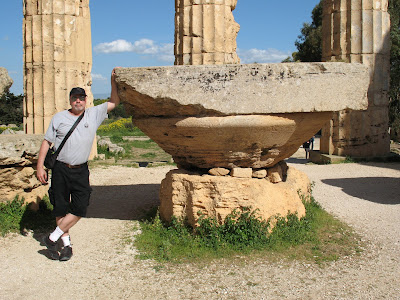 But many of the capitals have fallen. On the ground level, we can appreciate their large scale. 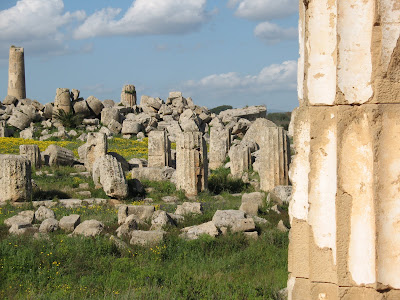 Temple F was badly damaged. Much of the white stucco facing for the fluted limestone column on right is still visible.

Temple G, below, was the largest of the 7 temples of Selinunte, the ancient city of Silenus. 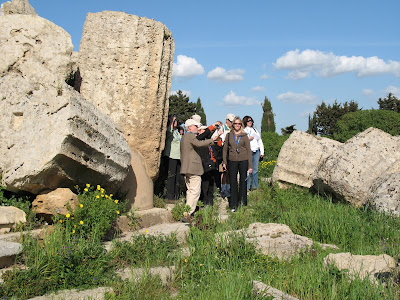 This temple had columns about 54 feet tall. Here, we see the columns were made of individual segments called drums, each of which are 12 feet high. 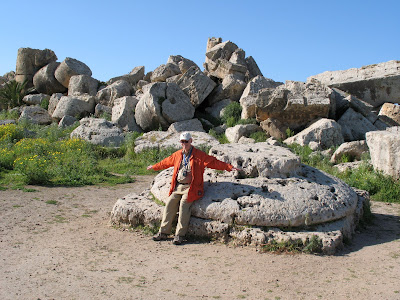 The overturned capitals, echinus on top of the abacus, has an 11' diameter. Here, the abacus and echinus were carved in one piece, unlike above at Temple E.
At the time of destruction, not all of the capitals had been fluted. Thus we
know that the temple was never completed


Nearby in Agrigento, the ancient city called Akragas, had a series of ten temples in the Valley of the Temples. 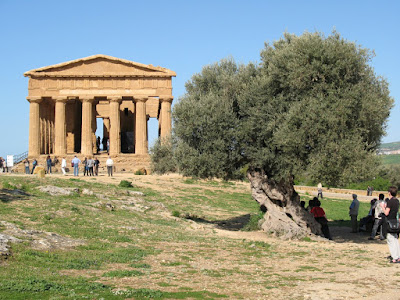 The Temple of Concord is one of the best preserved Doric temples.
It had been converted into a church in the early Christian period.

In the 8th -3rd centuries BCE, Sicily was a battleground between Greeks who settled 3/4 of the island and Carthaginians who settled the western portion; then it became the target of Roman conquest. 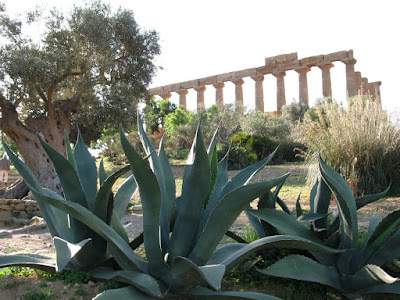 Though only a small portion of the peristyle remains, the
Temple of Hera was in better condition than most of these temples
which fell victim to Carthaginian destruction, then earthquakes.


But an even taller temple to Olympian Zeus would have been the largest of Doric Greek temples, the height of a 10-story building; it was incomplete when the disaster struck. 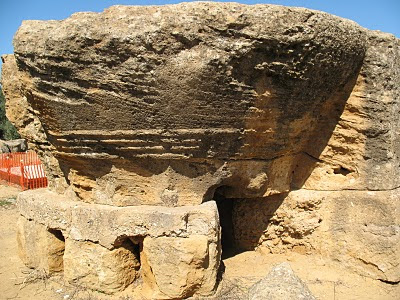 Construction began in 480 BCE and was still in progress when it was decimated in 407 BCE. The Telemon or Atlas figures whose bent arms support the architravemay in fact represent Carthaginian prisoners who had been made to build the temple. 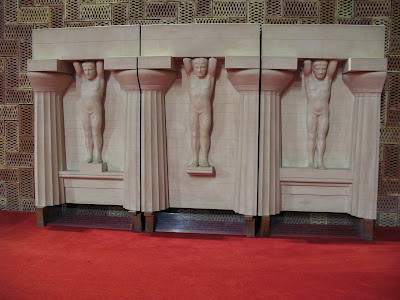 But even these giants, who appear to have held up the building, have fallen,
struck down by the Carthaginians who conquered Akragras.
Only a replica of one of the ruined giants remains on the site. 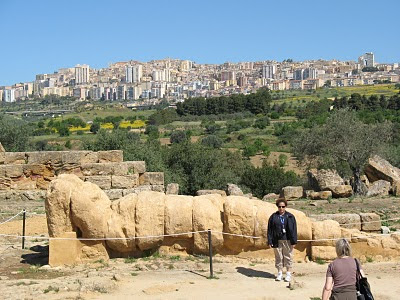 Ancient Akragas may have had 200.000 people in the 5th century BCE.Today we witness the fallen giant as a symbol of human pride grown too large,
and, consequently, fallen.
Posted by Julie Schauer at 4:40 PM