Images of a Collective Memory

Sally Mann created controversy two decades ago when she published photographs of her three children, Immediate Family. The photos are beautiful, artistic and arresting. The idea of publishing nude pictures of her children is startling, knowing it can and would attract pedophiles.  Did she really think the photos would only attract the photographers and art connoisseurs, as she claims? I would not do the same sharing of my children's private moments, but should I judge her? To me, art is reconciliation.  I look at art to bring opposites together and to negotiate the ambiguities of life, so that is what I am able to find in Sally Mann's work.  She, too, photographed her children to reconcile her need to be a mother without suppressing the artist in her.  They are one and the same.

In June Sally Mann spoke at the National Gallery of Art and read excerpts from her book, Hold Still.  She uses language exquisitely, much as she composes photographs with great artistry.  Like any good biographer, she succeeds in creating mythology.  While reading her book, I was thinking isn't everyone's life so rich and interesting?  It takes the artist to know that, to find that and to bring it to light. Her book is worth the read.

Candy Cigarette hits us in the gut about that time and place of transition into adolescence when we try to rush the process. It expresses the essential difference between her three children marked at a moment of time. The pre-pubescent daughter Jesse stands in center, in an affected pose.  The brother is on stilts behind. Virginia, the youngest turns her back to us. The children are together but very separate, each caught in their own version of reality, expressing their individual truths. Composition and placement make the photo work.  Jesse's strong, sharp elbow leads the way to both the brother and the little sister.  The angle of the cigarette points to the younger girl who in turn looks at the brother.  Of course in this image, she brings out the significance of the moment.  In many of her photos, she shows the not-so innocent quality of children, which is why many found it disturbing.

Mann's photos can be spontaneous or contrived, or a combination of each. A hallmark of her work is balancing the factual with the contrived. She takes happenstance and makes it better. Artists have an ability to see the significance in some event, enshrine it and visually communicate in way that maximizes its significance.  They help us, the viewers, to see inner states of mind as eternal truths.  Black and white photography -- with the emphasis on contrast -- sometimes is best.

When looking at The New Mothers, I'm reminded of the very first fine art photographer, Julia Margaret Cameron.  The children pose and act, much like Paul and Virginia, a heart-warming photograph of Victorian children acting as if 'in love" back in 1864. These kids were good at it.  Mann's own daughters are delightfully feminine and express the joy being that way.  We appreciate their strength in expressing themselves, as we move into a time period that tries to suppress expression of pride in one's gender.

When judging on her artistic merit and on what makes her message resonate, I believe her work hits at something quite deep. Rarely does photography approach the artistry of painting, but Sally Mann does by finding what is special in the mundane world.  She can see the extraordinary in the ordinary.  She sees life in death and death in life.

What I personally look for in art is a way to reconcile opposites. All life is paradox, and Sally's art hints of this paradox. Art can unify.  Life is messy but in art there can be a place where all comes together and we can make peace with messy situations.

Among the descriptions of her children's pictures are disturbing, unsettling and "suggestive of violence. There's a wildness about the kids, freedom, strength and to some people, suggestiveness.


At the same time there's love written throughout. She loves what they represent and what they  taught her, as children have much to instruct us about uncontrived living. Perhaps it's that she portrays them without vulnerability that disturbs some people. When Mann photographed her children, she had their permission (at least until they reached a certain age). Most pictures don't show them as innocent and vulnerable. As long as they're under her watchful eye (and the camera's eye, they are protected by their mother. As she said in her talk, she saw her roles of being an artist and being a mother as one and the same. Her pictures are daily life. All of life is paradox, and her family photos show everyday life with hints of the paradox between innocence and experience. 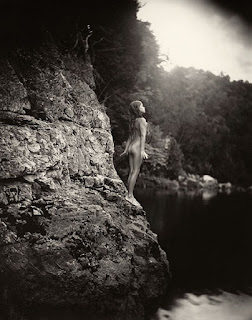 How and why did she grow up to be an artist?  Sally claims to have had free-range parents, but lived at a time before free-range parenting became a buzz word meaning neglect. It was possible in ways it isn't today. Accordingly, Mann is an artist from a place, Lexington in southwest Virginia, the burial ground of Robert E. Lee and Stonewall Jackson. Her father, husband and one of her daughters attended school at Washington & Lee.  She went to the Putney School, where she was influenced by an inspirational photography teacher. She then went onto Bennington, but graduated from Rollins College. She has a masters in Creative Writing from Rollins.

Much of what she writes about and photographs is about her surroundings, her identity with the South, themes of life and death which she views together. Is her account a bit exaggerated? I believe so.  I really question if a few of these stories really are true, or if she is merely using her skill at creating a great story. She describers her parents as unemotional people, totally absorbed with matters of the intellect.  She wants to feel closeness to her children, perhaps sensing that she needed more from her own parents.  Of her ancestors, she feels special connection to the sentimental Welshman, her mother's father, and to her own father who had a fascination with death.  Her father was a country doctor who went to people's homes and was totally dedicated to his patients.  He had an artistic side that his profession prevented him from following. Her mother ran the bookstore of Washington & Lee University.  She sees herself as channeling her father's largely suppressed artistic side -- and his obsession with death.  He gave her a Leica camera at age 17 and started her on her photography obsession.

Mann and her husband returned to the Shenandoah Valley to raise their children, as it is a place the kids could run wild and in the nude, as she did as a child.  A nude photo of Jessie in a swan pose took some work.  While watching her kids, with the artist's eye, she noticed the significance of an event in passing. Then she worked on the photo of it, through trial and error until it reached the near perfect.  She grew up playing in old swimming holes.  There was nothing unnatural about skinny dipping in this environment.

Being a photographer was her way of being a hand's-on parent and truthfully I admire this much more than the hard-driving moms who separate their work life from family life and put that life ahead of appreciating the life of child.  (I should write another blog about children in art, and about how other artists treat the theme of childhood.)