Cheating card players and fortune tellers by Caravaggio and Georges de la Tour are among the best-known paintings of deception.   Two extraordinary Velázquez paintings completed in 1630, The Forge of Vulcan and Joseph's Bloody Coat Brought to Jacob, above, are also allegories of deception from the Baroque period of art.

Although a Biblical painting and a mythological painting would not seem connected, the canvasses match in height, format and the number of figures, six each.  The painting of Jacob and sons has been cut at either end, while the other image has added canvas to the left.  Both paintings have large window openings onto landscapes on their left sides.  There are only male figures, many of them scantily dressed to show the artist's extraordinary ability at depicting muscles of the arms, legs, back and chests with fine nuances of light and shadow.  Joseph's Blood Coat Brought to Jacob also has a barking dog. 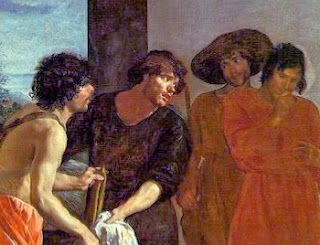 Velázquez painted these pictures during his first of two trips to Italy, in 1630.  In Italy, he seems to have been influenced by the frieze-like compositions of classical sarcophagi, which inspired him to spread his figures along the front of the composition, where the figures can be read from right to left or left to right. 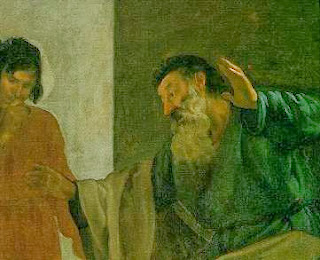 In Joseph's Bloody Coat Brought to Jacob,  the lies and deception are still occurring. Joseph's jealous brothers have sold him into slavery in Egypt, keeping his coat.  They smeared blood of a goat on the beautiful coat and then told the father Joseph had been killed.  While two of the brothers who are slightly darkened may evoke the shame, the two holding the coat are without remorse.  They lie so easily, while a brother whose back faces us is feigning horror.  Only five of Joseph's ten older brothers are present.  (More sons would ruin the format of the composition, but this omission also suggests that the other sons had remorse and couldn't continue to carry out the deception in front of their father.)

Velázquez painted a vivid picture of poor Jacob, who favored Joseph among his sons.  He is frightfully upset and disturbed.  Below his foot, Jacob's dog  barks with a recognition of the duplicity taking place.   The viewer can't help but feel the old man's crushing pain.  Jacob is a tragic figure.  Velázquez shows his ability to depict texture, especially in the carpet and the dog.  He's equally adept at showing an awareness of the dramas of human nature.


In The Forge of Vulcan, the deception is announced by the sun god Apollo, who announces to Vulcan that Vulcan's wife Venus, is cheating on him. The helpers at the iron forge show curiosity and shock.  A young worker on the right, mouth ajar, is particularly comical in his spontaneous reactions. The god Vulcan bends vigorously and is upset.  He's all the more foolish because the announcement comes while he's making armor for his wife's lover, Mars, the god of war.  It's comedy more than tragedy, and Apollo, a tattle-tale, looks proud and gossipy. 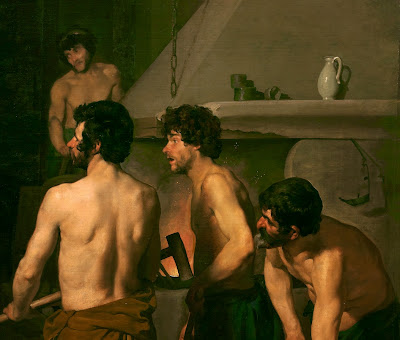 Velázquez shows that he could portray comedy and he could paint real tragedy.  He used his skills to reveal much about human nature, as well as Shakespeare had done writing plays in England two decades earlier.  Velázquez's brushstrokes capture amazingly realistic textures.  The  fire of the smelting iron, as well as the sheen of a vase and of armor, light up Vulcan's blacksmith shop.  Furthermore, he has painted the workmen closest to the fire in warmer skin tones, true to the colors that light from a fireplace would reflect on their flesh.  The colors and sensibility in the entire scene are more earthy than the inside of Jacob's palace. 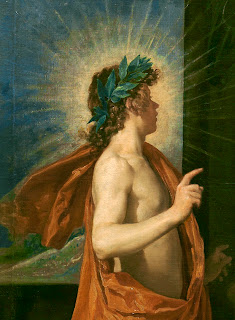 While we may get a laugh at the gods of Mt. Olympus, we're appalled and saddened by the behavior of Jacob's sons.  For an artist in pious Spain, deception in the Bible is tragic while deception in mythology becomes a comedy. Velazquez painted other mythological subjects, but his Bacchus is debauched and flabby, and Mars, god of war, is out of energy and depleted.  Mythology is good for stories and subject matter but he didn't always respect it as much as Italian artists like Titian, or French artists like Poussin.

Though I've never been to the Prado Museum in Madrid which has 45 Velázquez paintings, I had the good luck to see these beautiful images in a Velázquez exhibition at the Metropolitan in 1989.  These two paintings knocked me the ground, I but didn't understand how they were linked in meaning until reading the catalogue and other literature.


Posted by Julie Schauer at 5:14 PM No comments: Links to this post