Degas's Dancers at the Barre 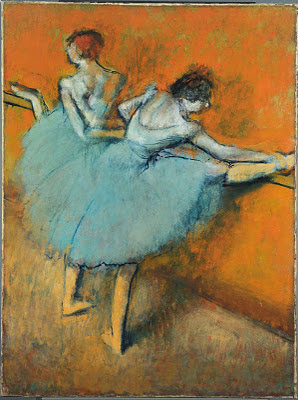 Two Dancers at the Barre, early 1880s−c. 1900, Oil on canvas, 51 1/4 x 38 1/2 in. The Phillips Collection, Washington, D.C. Acquired 1944. This painting is the centerpiece of the current exhibition.
Point....Flex.....Relevé-----these themes of ballet dancing were the obsession of Edgar Degas, an artist associated with Impressionism but known for his paintings and pastels of dancers. Washington's Phillips Collection recently put their large painting, Dancers at the Barre, under their conservator's care. In the process, they discovered wonderful color and took a deeper look into the process of this artist. The exhibition Degas' Dancers at the Barre: Point and Counterpoint transports the viewer into Degas' mind and back into the opulent Garnier Opera House which opened in Paris in 1875.

Most of the paintings, drawings and studies in the exhibition feature women, mainly ballerinas. After viewing the show, I once again get the feeling that Degas is the foremost among artists in his understanding of the strength of the female body, just as Michelangelo leads all artists in the understanding of the male bodies. However, unlike Michelangelo, Degas did not demonstrate knowledge of musculature or make his figures sensual. At times he appears to negate the underlying anatomy and distort in order to show the body's expressive possibilities.

Ballet Rehearsal, c. 1885–91. Oil on canvas, 18 7/8 x 34 5/8 in. Yale University Art Gallery. Gift of Duncan Phillips, B.A., 1908 The composition is asymmetric, typical of Edgar Degas.
Degas's compositions are about contrast: left and right, point and counterpoint, up and down, orange and blue-green, line and shape, solid forms but with diaphanous clothes, stability and movement. He portrays movement with color and with spontaneous, oblique compositions, allying him with the Impressionists. He exhibited with them from 1873-1886. Arguably, Degas was the greatest of all draftsman during the 2nd half of the 19th century, a time of tremendous artistic creativity.

Degas's studies of dancers reveal his desire to understand and express the outward effects of stretch and stress, not inner musculature. At this time, ballet was not the idealized performance art we imagine. Instead young girls worked long hours under difficult conditions, with much strain on their youthful physiques. Under Degas' interpretation, we witness the precision and tour de force of their labors. He drew and painted the rehearsals more frequently than actual performances. In Degas's early paintings, the viewers admire the dancers' poise and balance, as they move into difficult positions. In later works, such as the signature piece of the exhibition, we see much contortion and distortion, somewhat like a Cirque du Soleil performance. Through Degas's drawings, paintings and pastels, we do not necessarily appreciate the body's outward beauty, but we understand its possibilities, flexibility and the strength of human effort. The bodies' movements are gestural and evoke strong feelings. 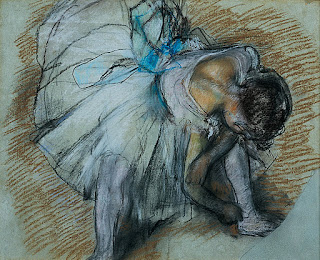 Dancer Adjusting her Shoe,1885, Pastel on paper, 19 x 24 in. Collection of The Dixon Gallery and Gardens, Memphis, Tennessee; Bequest of Mr. and Mrs. Hugo N. Dixon, 1975.6. Drawings repeat poses in his paintings and often show changes of the artist's mind.
Degas is unique amongst the Impressionists in the strength of his line. Outlines at times contrast with the soft tutus of transparent colors. But his colors are sometimes brilliant, particularly oranges and blue-green. There are also vivid bows of pink, yellow, orange and red. He is superb at using color contrast to create light and shadow. Degas painted mainly indoors, but he used natural light from windows to sparkle on his dancers.

He normally works with off-center compositions, an effective foil to the dancers in their shoes. His asymmetry is like the fragile balance of the ballerinas on the tip of their toes: it can be a precarious balance. The art of the ballerina is to remain strong and poised in difficult positions, and Degas balanced his asymmetric compositions artfully, which was equally a challenge. 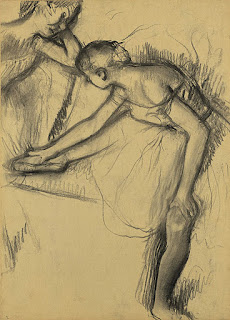 In a nearby gallery are the works of other artists, such as Manet's Spanish Ballet. Sculpture helped Degas refine his vision and the exhibition includes 3 bronze-cast sculptures. Like any great artist, he worked on the same themes over and over, same pose with slight differences. Several late works are pastels, a ideal medium for his methods. The Phillips' exhibition also runs a filmed performance of Swan Lake.Hilaire-Germain-Edgar Degas, Two Dancers Resting, c. 1890–95, Charcoal on paper, 22 3/4 x 16 3/8 in. Private Collection.
Posted by Julie Schauer at 1:51 PM 4 comments: Willem de Kooning, Merritt Parkway, 1959, from the Detroit Institute of Art, Bequest of Hawkins Ferry, is in an exhibition at the Museum of Modern Art (called MoMA), New York
At first glance, Frans Hals and Willem de Kooning have nothing in common, other than being artists who originally came from the Netherlands. More than three hundred years separate their art and two very different New York Museums, the Met and MoMA, have exhibitions of their work. Hals was vividly realistic and de Kooning was a founder of Abstract Expressionism, but their common grounds are looseness of brushwork, luscious paint and bold energies going in all directions. In short, it is their painterly techniques. Women, II, in MoMA, part of the Blanchette Hooker Rockefeller Collection, is one of many paintings of women that de Kooning did in the 50s

Analyzing the radiating diagonals of Hals' compositions and paint quality, we might wonder if de Kooning 's thick, diagonal brushstrokes, sometimes overlapping and transparent, were inspired by Frans Hals' compositions. Both artists give the viewer a texture we would want to touch.

Frans Hals, detail of woman, from Young Man and Woman in an Inn
And then there is color; in Hals, it's the beautiful blue sleeve and feathers of the man leaving a bar and the flushed cheeks of a woman grabbing his arm. Hals soaked her cheeks with redness from too much drink, but at a time when artists did not exaggerate color. Perhaps a coincidence, but de Kooning, particularly in paintings of women, dared to make the reds quite strong. Women, II, shown above, also has a tactile quality to its blues, greens, red and white.

The soft and furry dog is typical of Hals' ability to paint wonderful, tactile effects

In Young Man and Woman at the Inn, we witness Hals' desire was to create a snapshot of time, a vivid realism that looks fresh and unplanned. He used a close-up view, a foreshortened upper arm and a jump into deeper space. The arm holding a glass pokes out of the picture frame. This view looks spontaneous, as if the couple did not know they're being caught by the artist. A dog in the lower right hand corner completes Hals' soft, painterly picture. This Dutch master is known mainly for his portraits.

De Kooning, on the other hand, immigrated to the United States and made his fame with the New York School, the Abstract Expressionists of the mid-20th century. The Met's show of Frans Hals will end soon, but MoMA's very large exhibition of de Kooning will continue until January 9.
Posted by Julie Schauer at 3:03 PM No comments: